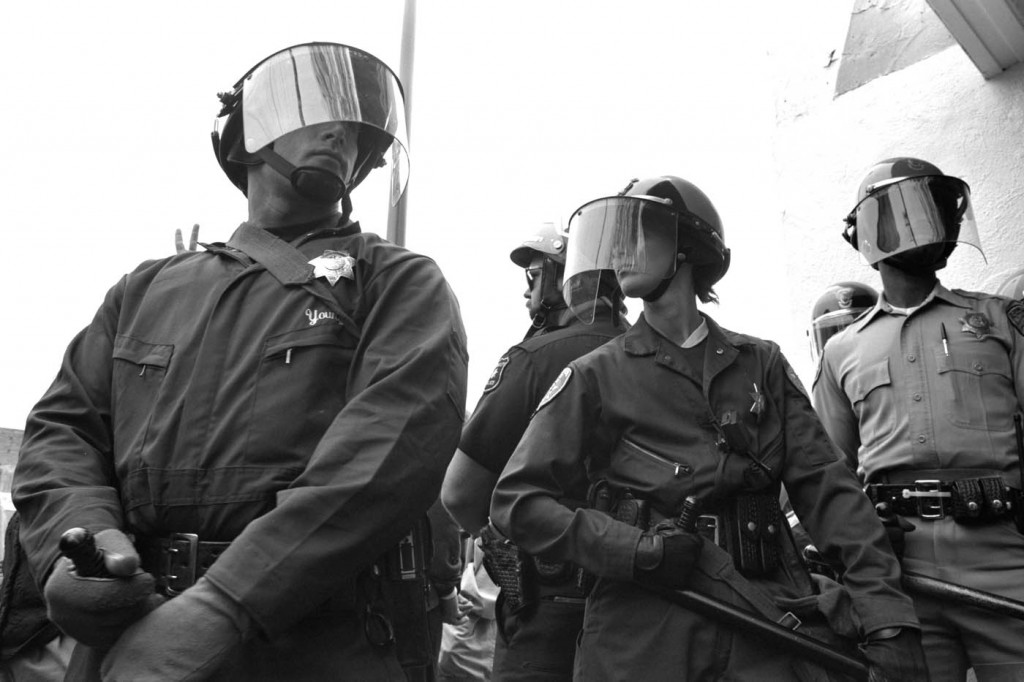 This is not a story about the 1991 People’s Park riots as such; it’s really an extended photo essay about the occupation of Berkeley in August 1991. A version of this was first published on my old Pandemonia site in 1994; this is a long-overdue update to that original version, but it hews pretty closely to the original’s content and aims.

I missed the first few People’s Park riots on Telegraph Avenue completely — I’d be playing cards in the evenings with friends in the Milano, and I’d emerge into the night on Telegraph and notice that there’d been another riot…. I’d feel a little stupid, looking at the glass-strewn streets, and I’d wonder how I could miss the sounds of rioting only a few hundred yards from the cafe, but hey, this was Berkeley, we have riots here all the time, and a certain studied nonchalance is probably the best attitude anyway. Another day, another riot… and besides, most of the riots to date had been little more than drunken frat-boy binges or nihilist and pathetically dissolute punk protests.

This time it was different. It was the season for serious protest now — UC Berkeley wanted People’s Park back, and the people of People’s Park didn’t want to let them have it back. Never mind that People’s Park at the time was a sometimes intensely unpleasant place to be: squalid, garbage-strewn, chaotic, and full of people (not just the homeless) looking to pick a fight with almost anyone who didn’t look or think like themselves (cynically: Berkeley writ small, in other words). Never mind all that: this was People’s Park, this was history — Berkeley History — a fairly potent symbol of the 60′s and later struggles against the University and authority in general, and by now a haven for the homeless and various political groups.

So this time I decided to play photo journalist — something I’d never done before — and walked or cycled around Berkeley with my camera taking photos of whatever happened. I knew almost nothing about how to take these sorts of photos, and I had no press acreditation. But I did know the issues, I did recognize many of the key players, and it was all happening on my home territory (at the time I lived in downtown Berkeley, and I sold jewellery, T-shirts and photos part-time for other people on Telegraph).

After several confusing nights of trying to dodge police, actually see the rioters, and follow the protestors, it became clear that for me the real story wasn’t the riots, it was the week-long occupation of (Berkeley) Southside by some 600 police, and how it felt to live in this occupation, being forced to show IDs when walking down your own street, or having to justify to some faceless out-of-town cop your decision to work or shop on Telegraph Avenue. At one stage some twenty or thirty police were on every block of Telegraph, just watching you walk or talk, or sometimes edgily harassing random passers-by. The atmosphere was tense and bitter; this was our city, boarded up and invaded, and both the rioters (a very small minority of the People’s Park brigade) and the police were either outsiders or generally unwelcome. So after the initial frenzy I deliberately steered clear of covering the actual riots and demonstrations (everyone else took photos of them and their aftermath), and concentrated on the police and people. I did manage to get a few photos of events while taking other shots, though; some of them are shown here.

The other story, of course, was that while the riots were the big news on all the TV newscasts and made great front-page headlines in the papers, it was the peaceful but often chaotic demonstrations that were really significant (no surprises there). The riots depressed most of us; the occupation was even more depressing.

The images included here are a small selection of the photos I took that week, divided a bit arbitrarily into “Police”, “Places”, and “People”. And yes, they’re not technically very good, but they’re all I’ve got.

The police were everywhere around People’s Park. Berkeley police; Livermore police; the Highway Patrol; Albany, Richmond, Oakland police; the Alameda County tactical response squad — all with something to prove. The out-of-town cops seemed predictably vicious, out to kick some of that supposedly soft Berkeley ass (all those hippies! all those punks! — it must have seemed like cop heaven at times) and show the Berkeley cops how to really put down a riot. The Berkeley police (who’d lost control during the first hours of the riots) seemed bent on proving that their mixture of firmness and reasonably good-humoured tolerance would finally work.

Once the police worked out what was happening (late Friday night, I suspect), they started using a bunch of unnerving strategies and tactics. In particular, they’d suddenly issue ambiguous orders or signals about which side of the road (for example) was OK and which was not, then almost immediately arrest anyone on what they determined was the wrong side — without giving people any time to understand the orders, let alone get across to the right side. What constituted the right side was almost always quite inscrutable or arbitrary. The obvious intention was to make even spectators liable to arrest, in an attempt to keep crowds away — in effect, to make it plain that they considered that there were no innocent bystanders any more (despite the residents and shoppers trying to get around).

Combined with the sudden changes in direction and tactics used, this was very effective — at any particular time, you were never sure whether you were safe, about to be shot at with wooden bullets, or arrested, or just politely asked to stay off the sidewalk or something.

During the times when there were no protests or riots (most of the rest of the week), the police just lurked, mostly watching the world go by, often enough with good humour and a certain amused tolerance, but also sometimes harrassing people, sometimes asking for ID… the trouble was, you never knew ahead of time which attititude you’d encounter.

But for all that, it was difficult to miss that the police are human too — with all the good and bad that implies.

I recognized most of the major players, and a lot of the Telegraph regulars, even though most of them probably wouldn’t have had a clue who I was. Even some of the BPD officers were at least familiar with my face, which helped sometimes (weirdly, the police tended to treat me like a professional photographer and let me through lines, etc.). Two of the more locally-famous names showing up in the images below are Maudelle Shirek and Michael Delacour; even Rosebud Denovo’s in there if you know what you’re looking for, I think.

Even during the middle of the demonstrations and troubles there was a constant stream of shoppers on Telegraph; some of the usual weekend street stalls remained open in the face of some pretty annoying disruption and sudden loss of potential customers as the street was swept of pedestrians (there’s even a weird-looking photo of me in there somewhere minding the shop).

Telegraph Avenue was something of a second home for me back then. It was easy to walk to from where I lived downtown; I did a lot of shopping up there (especially music and books); I ate and drank there a lot; and I used to help friends of mine sell jewelry, t-shirts, and photos, and pierce ears, etc., on the street.

So it was depressing to see a lot of the familiar places boarded up or with smashed windows (something everyone thought was wrong, regardless of politics). And it was surprising to outsiders who’d never actually seen the place, to see just how tawdry and unfriendly People’s Park could be in real life.