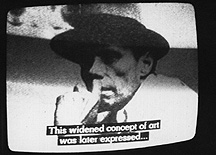 A Work In (Slow) Progress

I Have No Pretensions To Art...

"Trendies call it Art, he thought; me, I'd call it egomania. Trendies see it second-hand, in galleries or little photos tacked onto the end of articles with sentences like 'Hence this antimony in writing finds its fragile resolution in RAMMELLZEE's corpus', (Corpus! Cor Blimey! he almost shouted out loud), 'where armored letters ascend into space free of any impediment. His scenarios visualise a utopia where the Letter forever unfetters itself'".

...I'm A Reporter. I'm sometimes asked about my "art", but this needs to be got right out of the way: don't hold me to Art -- what I do here is reporting. ("Art" == "That which makes me laugh". I mean this in the nicest possible way.) I'm a wordsmith and a nerd, well-suited to poking cameras at people and things, well-suited to rushing about blindly seeing the world through a lens (there are none so blind as those with Vision...). But not an artist. I was (and still am) an anartist, with a healthy respect for Debord, Dada, and people like Mike Parr; but that's all a rather-too-long story for here....

I'm mostly driven by little obsessions with particular themes or things -- the abstract shapes of domestic items, for example, or the found surrealisms of everyday life. If I had a single obsession it'd be the monomaniacally egotistical urge to show people how strange the familiar is, how much everyday life involves the surreal, how odd the little banalities of life can be. But mostly I do it because the world Out There is stranger than fiction, and I've got a burning desire to show this to people (Yes, I know, it's the old middle-class- white-boy- bourgeois-naif- hits-brutal- reality-and-treats- it-as-an-aesthetic- experience syndrome, but it's worked so far). And besides, photography provides the sort of instant gratification that writing doesn't. And it's a hell of a lot easier than either music or painting.

If I hear another Californian tell me they do photography to "find themselves" (or to find their "true inner self" or such like) I'll scream. Whatever happened to trying to find and understand The Other? You know, other people and things? What's this obsession with turning the camera into an accesory to self-absorption?

I can't help thinking this is a symptom of that terribly Califonian mistaking of self-absorption for spirituality, and the concommitant transformation of spirituality into a lifestyle accessory. (What's worse is the way public self-absorption has become something of a sacrament here...).

Don't you ever just stand there seeing something?

Don't you see the beauty in the curves of the freeways, the tangles of overhead ramps and flyways, overpasses and concrete bracing? In the converging lines of a well-architected building? In the surreal sprawls of colour emerging from last month's garbage or yesterday's urban decay? In the smooth erotics of clothing and landscape? (Before you accuse me of latent Futurism, read your Venturi).

I sometimes megalomaniacally want to show people the world; I want to be able to affect the way they see things; I want to have someone accidentally stumble onto a scene they've seen only in one of my photos, and see.... It's the old "I never saw it like that before" syndrome. Mostly though, I like Maya Lin's concept of creating a space that stimulates people to think, but that doesn't tell them what to think. There's enough hectoring in this world already....

I'm very much a photographer of the familiar -- I find it hard to take photos of things I've never seen before. I want to see it first, then re-see it again and again in my mind before I return with a camera. I've spent days driving the Central Valley or the Mojave (without a camera) just looking, just storing up in my mind the sights, the shapes, the lines and perspectives, the textures and colours. Sometime later I spend a frenzied week or so returning to the long-imagined places.

I can't seem to see the wood for the junk. I'm not wildly attracted to the sights everyone else seems to photograph -- the Halfdomes, the sunsets over the Sierra, the redwoods and the sea lions (or rather, I'm not attracted to photographing them). I can't see the point -- everyone else does that, and usually much better than I can -- and what's the point of doing what everyone else is doing unless you can do it better? And more to the point, what could I report with these images that other people haven't reported? (But then if I were really good I would be able to say something new with these old images...).

I'm fascinated by the way people live here -- in the deserts, in the suburbs, in the cities, in the mind.... I keep trying to capture the confusion of forms (human, natural, artificial), the profusion of junk yard landscapes (have you ever driven State Route 58 into Barstow?), the varieties of decay and regrowth, the varieties of wilderness...

But don't listen to me.